ERIC A BIRD Jewellers first opened in Lincoln during November 1959 by Eric A. Bird and his wife Giovanna. Eric had started out in the trade in Ipswich before joining the RAF as an instrument maker during World War 2. After the war Eric returned to the trade and worked in and around London, eventually owning two shops in the Brixton area. In 1959 the the decision was made to move away from London in order to be closer to Giovanna’s family so Eric and Giovanna moved to Lincoln. 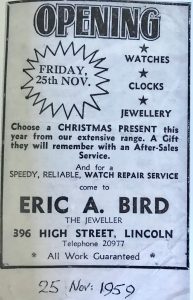 They aquired a shop at Ashton’s Court on Lincoln High Street where Eric carried out trade repairs and began to sell a little stock. After a few years the opportunity arose to move the business into the City centre renting a small shop in the Cornhill. As the business developed Mr. Bernard Ward was employed as a Watchmaker, working in a room above 4 Cornhill.

With continued growth of the business it became necessary to employ another pair of hands to work in the shop. In July 1973 Steve Thompson joined the business directly from school to learn the trade under Eric’s guidance. In 1977 the expanding business demanded another change of premises was required, so the buisness relocated, moving to its current location, No. 1, St. Mary’s Street in April 1977

In 1994 at tha age of 74 Eric decided that the time was right for him to retire and on June 1st 1994, after 21 years of dedicated service, Steve Thompson and his wife Maria  bought the business from Eric. It was decided that the name and philosophy of the business would remain, providing quality and service to the people of  Lincoln.

Since 1994 Steve and Maria have run the business together, building on the foundations laid by Eric and strengthening the business reputation as an  honest and reliable independent Jeweller. They are very fortunate to have many loyal customers who have been trading with them for many years.

Steve and Maria wish to thank all of the customers who have given their continued support and hope that those who discover Eric A. Bird Jewellers in the next few years will become future regular customers. 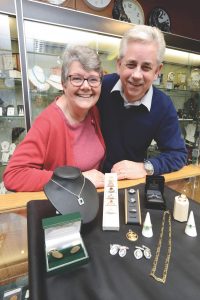